skip to main | skip to sidebar

No joke... I guess it's time to do a little update! After an obscenely long absence due to school, work, family, girls, games, laziness, etc... I finally got around to creating a new mask to make some new vids! This one is special since... well... I can actually SEE out of it. The last few videos were all done blind essentially. With my new video camera, I can also afford to go more places. It's good to be back!

It's like a black hole that eats up all my free time... Our bosses are, for the most part, assholes. This causes morale to drop to truly depressing levels. People are quitting left and right. Hell, they're getting jobs with LESS pay, just to save themselves the stress. Now that the holiday season is coming... I dunno if I want to be around for the mess it's going to bring.

Well, that was surprisingly depressing from me of all people, but it was what was on my mind at the moment.
Posted by Vaulen Lithun at 12:01 PM No comments:

....This should be the ass whoopin' theme song. Just saying...

Seriously, this should be the song that plays in your head when you're getting ready to get even. So freaking awesome. Does it make me want the game? Not hardly. It's just a great song.
Posted by Vaulen Lithun at 11:04 AM No comments:

The videos will be coming back soon!

Hold tight... I've got some stuff planned that you'll all enjoy!
Posted by Vaulen Lithun at 12:11 AM No comments:

Unfortunately, my computer was fried by a FREAK LIGHTNING STORM. I had heard of it happening once or twice, but to actually witness it... let alone be the victim of such a terrible thing... is a horrible experience. Thankfully, my brother is cool enough to let me use his. The only drawback being that it's a COMPAQ. With that being said, it will be a while before I can get any new videos up, and this blog will recieve updates MUCH slower. Sorry... it's just until I can buy a new PC.

Speaking of videos, I have to wonder if anyone gets to this blog through the descriptions for my videos on YouTube... If you have, PLEASE, feel free to comment. Please and thank you!
Posted by Vaulen Lithun at 11:44 PM No comments:

I've become completely obsessed with this group lately... I don't know why, but it's the only group I've been able to listen to lately. This isn't exactly a long post, but it's what was on my mind at the moment...

So. Freaking. Good.
Posted by Vaulen Lithun at 2:20 PM No comments:

Ok, THIS IS WHY WE'RE SO DAMN FAT.

*ahem* Chocolate chip pancake wrapped sausages on a stick. Sounds unlikely huh? That's what I thought when I heard it, but I was wrong... Oh so wrong... 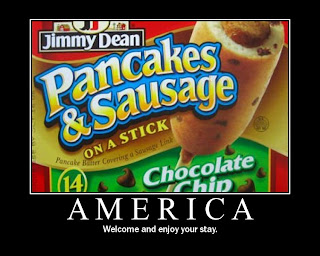 Who decided "Oh, snap! Great idea!" ? This isn't the first, nor the most shocking thing you'll find in the American snack cookbook, but it really makes you think. We have a society that is constantly working to eliminate manual labor and physical movement to suit our laziness. What's worse is that people are actually "OK" with being obese. BEFORE I GET COMPLAINTS, I'M NOT SAYING I HATE FAT PEOPLE. Hell, the overly thin give me the jeebies... being a little overweight isn't such a huge deal, but this is where it becomes a real issue. Oh, and yes, THAT IS HER STOMACH.

I'm certain to receive quite a few arguments, but I'll only deal with the most prevalent ones. Firstly, it's nobody's fault but your own. Yeah. You CAN in fact control what you eat and how much you exercise. I don't care if you're depressed, eating will NOT fix whatever is wrong with you. Also, Your "baby weight" is not an excuse you can lug around for a year after having the kid. You and you alone are responsible for the shape you're in. The same thing that applies to alcoholics, drug addicts, and the like does in fact apply to being morbidly obese.

"But K.K.! It's all McDonalds fault for making their food so addicting! They knew I wouldn't be able to control myself!" That's bull@#$% and you know it. As much as it pains me to say it... Regardless of the fact that Rondald McDonald is in fact the greatest evil that walks this earth, and heads one of the most powerful corporations of all time, he's not holding you at gun point and forcing you eat that 3rd Big Mac.

It all boils down to this... M O D E R A T I O N. I'm not saying stop eating and stick your finger down your throat, but tighten the reigns a bit. It's not impossible, you'll live longer, and you'll avoid a lot of health complications.
Posted by Vaulen Lithun at 11:04 PM No comments:

Vaulen Lithun
I'm Vaulen. I'm just a guy with an overactive imagination, a keyboard, and entirely too much time on my hands. This is where I'll be letting my thoughts run free so I don't end up wanting to strike someone. Also manga. =)